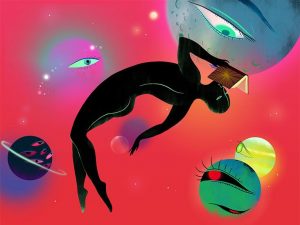 What went through the mind of the first primate that realized its body would soon decay and die? Likely, that fear found itself into our very DNA, something horrific but true which must immediately be screamed about at the top of the nearest mountain.

Even if lesser-evolved animals share with us the ability to understand their own mortality, could they build upon that epiphany, to then conjure up ideas of an afterlife, a standing legacy, a lineage that stretches far past the sunset? An animal that can envision the world in which their offspring’s offspring will one day live is an animal indeed worthy of great respect!

Are we privileged or hindered in our distinct capacity to project ever-forward? Knowing of one’s mortality can instill a sense of lazy fatalism, a “what’s the point?” attitude, leading to thoughts of “god’s grand design” or a “just making my way to the coffin” outlook; or, sometimes, it can give rise to think of a more permanent existence.

The monuments of the past would strongly suggest that mankind has attempted to make its own timestamp on eternity, all those efforts to be remembered forever. With some seeing themselves as literal gods, those ideas of “forever” resulted in forms of suffering and hardship that is hard to calculate. No pyramid or skyscraper gets erected any other way. The only ones more ambitious than Kings, Pharaohs, and Corporatists are those who wish to count the bodies underneath their gold-plated soles.

Mother Earth always proves to be a challenging obstacle. Ice ages, rainfalls, and seismic shifts were constantly throwing blows. Worse, the cosmos also liked to take swipes at earth’s many species. It’s believed that an asteroid hit earth 66 million years ago, destroying three-quarters of life on earth. Surely the would-be Gods of flesh considered such possibilities when they reached for the clouds.

Archaeologists, astronomers, scientists of all stripes, as well as UFO hunters imbued with the most credulity, would all love to find evidence of extraterrestrial intelligence. How exhilarating it is to think that just on the other side of the moon, the so-called eternal darkspot, hides some bubble, inside of which houses a community of gray-skinned, bug-eyed humanoids, who like to enjoy their space beverages while having a laugh at our collective ignorance.

I’ll accept two premises as true. 1.) Although other lifeforms probably do exist in the universe, the proof for such intelligence has not been found – for if it had, it would by now have been uncovered and thus widely disseminated. And 2.) We have not only fired rockets and satellites out past our atmosphere, but we have also placed such technologies onto other astral bodies. If these are both correct, it means that our civilization is already more advanced than any that came before. No pharaoh or king ever accomplished such a feat.

For anyone curious about Information – what it is, how it’s stored, and where it ultimately goes – this advancement in technology has terrifying implications. Because if we can place some beacon or satellite down on the moon, or have it situated far off in space, it would theoretically be spared from any earth-destroying catastrophes.

Think back in your life: How many things have you done that you wish you had not? As humans evolved, so has our sense of morality. Right and Wrong are matters explored in great depth, and we have often fallen short on our proclaimed principles. Consequently, most of us are plagued with the fantasy of going back in time and redoing certain choices from our past. Regret is an integral part of the human experience.

But even the most cynical could find some solace in knowing that, one day, far off into the future – or maybe sooner than that – our earth will witness another erasure, that which would destroy any memory of our misdeeds. Nobody would ever know about that kid you bullied in school, nor the name of the person you cheated on your spouse with. The murdered and murderer, the raped and the rapist, the burglarized and the burglar – all of these will be equalized in their nothingness, never a trace that any of them ever even existed.

While the evildoer could suddenly find relief, the few who called Christ’s bluff and happily cast their stones find themselves despondent. The crimes of the higher-evolved are never to be forgotten, so says the Almighty and the Perfect. Not even oblivion should save the wicked and the godless! Our experiences, victimizations, and vices would have become nothing more than a faint flash in the infinite vastness of space.

Only in that primitive scenario would an alien explorer find it difficult to diagnosis the ills of the human psyche. If the latest asteroid had hit a hundred years ago, oblivion might have saved us, as the only evidence of our crimes would have been shards of earth rumble. “What made a homosapien?” would then be much harder to deduce.

But that opportunity has passed.

“In the beginning,” so the bible begins, “there was the Word”; but the words themselves were chiseled into rock, and with great labor carried through oral histories. As with morals and tradition, the ability to communicate evolved along with us. Communication is what gives us the advantage over the lesser-evolved; the need to speak and to write is therefore innate and reflexive.

No surprise, then, when we see the masses waiting in line to get the latest I-Phone, nor as they bury their faces in the screen, typing their Very Important Words on small buttons. Indeed, in the modern age, as the art of prose becomes ever more remote, words are all too abundant. We make sentences, not out of necessity, but out of compulsion.

And the words are no longer contained as an echo in the desert canyon; now they bounce through technologies far away from us. We search online for our desires, let cameras capture our expressions, and pay no attention as governments and corporations continue to store and harness such information. Even if towers turn to ash, many of the records and blueprints will still be digitalized. What a data overload!

With this, we discover the real Inferno of the technological age: the impossibility for one to obliviate, for its entirely plausible that such electronic data is also being transmitted to satellites in space and drones on the moon – if not at present, then soon.

With these thermospheric data collecting systems, we become the extraterrestrials. And if the earth below does explode, the data will still be safely held – ready to be studied by lifeforms not yet known to us. Our criminal allegations, perverted conversations, and strange searches – all that data will help those lifeforms to draw a more perfect image of humanity. We’ll be remembered until that civilization too is destroyed, and by then what will they have done in terms of preservation? In this material realm, that’s as close to forever as I can imagine.

At last the would-be gods of flesh witness a kind of immortality. Might we ask: Is this state of being Heaven? Or is it Hell? Is our preservation as mass data something to fear, or to embrace? Will it compel us to behave less violently and more rationally?

Realistically, not every document in every institution will be digitalized. People who live on the outskirts and refuse to put their most personal information online will likewise be spared from analysis by our hypothetical aliens. Should the rest of us keep happily producing that data? Or should we try to evade immorality, and thus avoid a damnation which would have us scrutinized long after our earthly demise? 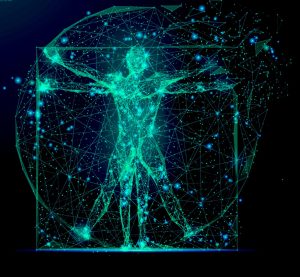